When there are more than one WebMetabase experiment linked to a compound record the user can access the functionalities that compare the result to multiple experiments to obtain a single metabolite nomenclature for all the metabolites in the database and therefore have a single report for a collection of the experiments.

The experimental data that has been processed in WebQuant that have been approved by the user is later linked to the Compound Library. The compound structure is automatically loaded into the Compound Library, if the compound already exists the system will add to the existing compound record in the Compound Library database a link to the new experiment and it will automatically import the retention time, the Area for any signal reported in the experiment, the CCS (Collision Cross Section) (Cross Collision Section value, the Mass Spectra, the interpretation of the Mass Spectra and also the end points that were defined in the protocol definition of the WebQuant experiment.

When there are more than one WebChembase experiment linked to a compound record the user can access the functionalities that compare the result to multiple experiments to obtain a specific product nomenclature for all the products in the database and therefore have a single report for a collection of the experiments.

There are two panel in the sdf import function: 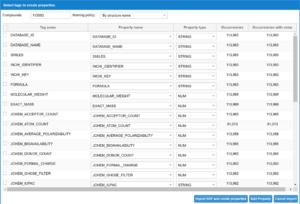 On the top of the table there is the information about the number of compounds that are included in the sdf and the selection of the naming policy of the compounds once they will be imported.

The table contain the variables that could be imported from the sdf tags as rows. Each column represents:

The system can also import several properties for multiple compounds in a comma separated file. This work has multiple steps, and it is accessible from the Exp Data Import button at the Compound Library initial page. To illustrate the process a csv shown in the next window will be used in a database that already contains the compounds that the data have been imported. One condition to apply this action is that the compounds need to be already existing in the database.

After the user selects the Exp Data Import, the file can be selected from the file system. Once the file has been uploaded it will appear in the CSV (Comma Separated Values) import table. Each row in this table corresponds to an uploaded csv file.

Each column in the table corresponds to: 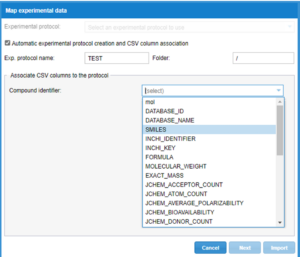 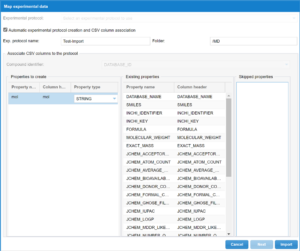 After importing the file, it will show the status of the import in the table.